all stories print article share article
On Tuesday, August 25, Interlink Academy participants met with Wolfgang Schmidt, State Secretary to the Senate Chancellery and Commissioner for Foreign Affairs of the City of Hamburg. The meeting took place in Hamburg's imposing City Hall or 'Rathaus', the seat of Hamburg's government and of one of Germany's 16 state parliaments. Built in the years 1886 to 1897, the building also houses the office of the First Mayor of Hamburg .

Wolfgang Schmidt met with us in one of the beautiful rooms of City Hall, and spoke about the city’s importance for Germany as a whole, the development of the harbor, how local government is dealing with the latest wave of refugees, and how locals feel about the 2024 Summer Olympic Games, which might take place here.

…Hamburg has nine sister cities in different regions of the world, the oldest relationship being with Saint Petersburg, Russia. The city cooperates closely with all of them because they share issues and challenges that are the same in every city of the world – transportation, houses, social aspects, integration, the environment. They jointly develop projects, run civil society activities, school and university exchanges, organize economic cooperations and investments, promote cultural cooperation, and work together on the political and administrative level.

“Hamburg is a very interesting city as well as a wealthy one: its GDP is the highest of all Germany’s 16 federal states, its per-capita GDP is twice that of  Berlin, and the city is ranked number four in Europe after London, Brussels and Luxembourg”

…One of our government’s top priorities at this moment is to build affordable new homes, not only for the rich, but so that a nurse or teacher could live in the city as well. We make sure that we build 6.000 new homes each year, out of which 2.000 need to be socially affordable. This is something that other cities are now learning from us.

…If you think of Hamburg, the port immediately comes into mind. It is truly the city’s «DNA», a vibrant point of connection with the world, where commercial activity is constant and lively.

…Hamburg is the largest railroad port in Europe. Hamburg is the gateway to the Czech Republic, Austria, Poland, and obviously Bavaria. So it not only serves the metropolitan region of Hamburg, but also the hinterland thanks to our railroad infrastructure. One of the challenges in maintaining competitiveness is to uphold and update this infrastructure. We are investing a lot into technology, causing Hamburg to be known as a «smart port». 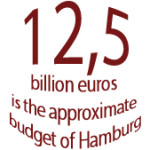 Refugees, the most challenging issue at the moment

…This is one of the issues we’ve been dealing with for at least the past 3 years, and it has recently become a pressing one. Roughly 50% of the asylum seekers who come to Germany are from Syria, Ethiopia, Afghanistan, and Iraq – countries where there is war or political persecution. Another 50% come mostly from the countries of former Yugoslavia, where no political persecution is taking place. There is clearly economic misery, but that is not a reason for granting asylum. So, at the moment, this is one of the most challenging subjects for all of Germany – how to respond to this massive influx of political and economic refugees.

…The problem is so difficult because no one expected this many people. We have to set up shelter and to integrate the asylum seekers. The issues we are dealing with at the moment qualify as very urgent and that is clearly felt that in Hamburg as well. We are recruiting places where we can set up tents and we need to find solutions by the time winter comes. 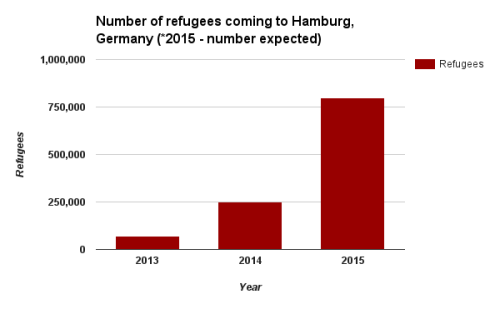 Why is Hamburg a candidate for the 2024 Summer Olympics?

…We can host games in the heart of the city, meaning short travel distances and times for the athletes. We are very fortunate because we have an appropriate space in the port that isn’t used anymore, and which we can turn into an Olympic Village.

…Considering that it costs a lot of money to build a stadium, we don’t want one that would be used for six weeks during the Olympic games and then remain unused afterwards. What London did and what we would copy from them is that we would build a stadium that can accommodate 70,000 people, but then reduce its capacity to 20,000, for use in the city’s regular life. The Olympic hall (for gymnastics etc.) would be converted into a cruise-ship terminal. That is why people believe in the project and I’m confident that we have demonstrated that we are capable of delivering on this.

„We have a feeling of progress in the city at the moment. People are keen to move forward and develop, there is a palpable energy. Hafen City is one expression of this. Ask any Hamburger and they will tell you that Hamburg is the most beautiful city in the world, that «we don’t need to go anywhere, we can stay here forever, because there’s no other place like Hamburg.»