all stories print article share article
In 1996, the 'Hamburger Abendblatt' was one of Germany's first newspapers to go online. Egbert Nießler, who heads the political desk of the online edition, talks about how the online and printed versions of the newspaper differ in terms of content, staff and audience. 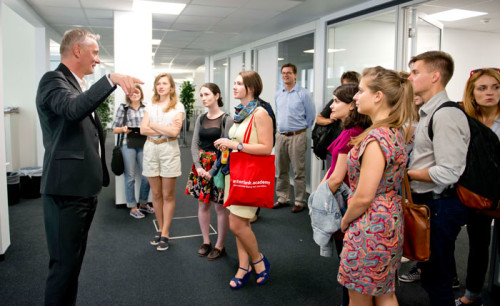 Egbert Nießler shows the Hamburger Abendblatt newsroom to the journalists

The name of the newspaper translates to “Hamburg Evening Newspaper,” as it used to be delivered in the evening after World War II. At the end of 20th century, it introduced an online version, which meant some technical challenges for the publication, as well as a slight change in its number of readers .

The second major step taken by this local paper was in 2009, when it introduced paid content. Today, the Hamburger Abendblatt has 20,000 subscribers to the online platform, who pay for absolute access to the online content, and 180,000 readers who prefer to pay for the printed newspaper.

The journalists from Eastern European countries who are currently participating in Interlink Academy’s digital journalism program and visited the newspaper’s offices in Hamburg several days ago, say these are big numbers. Jakob Drechsler, another representative of the daily newspaper, says no advertising campaign was used to achieve them.

20 people work for the online edition of the Hamburger Abendblatt, and there is  a cooperation between the printed and online departments, so the staff all write for both platforms. The general strategy is that breaking news is published in the online edition, then the next morning the newspaper publishes a more in-depth story, which the online edition then republishes, embellishing it with videos, tweets and other digital content.

“For a short period several years ago we tried to do both. Our boss at the time declared that every print guy would have to be an online guy as well, and you have to do both things at the same time. But that didn’t last longer than two or three weeks because machines can do that, but not the people operating them,” says Egbert Nießler.

Responding to one of the journalists’ concerns about the imminent end of printed media, Egbert Nießler, who has been working for the Hamburger Abendblatt for 24 years (and two days as on the day of the meeting), jokes that he is hopeful printed newspapers will be around at least until he retires.

Another concern expressed by the guest journalists was that the Hamburger Abendblatt doesn’t have an investigative department.

“Sure we have corruption, but I don’t think it is the main problem”, says Egbert Nießler, explaining that  some regular staff journalists may cover certain cases, but if they had a team dedicated to investigative journalism, it would have nothing to do for most of the year.