Renaissance geniuses created beautiful buildings with only the help of a pencil and their imagination. The 21st century grants many new tools to improve on humans talents. One such tool is the modern 3D CAD (Computer-aided Design) program “Renga”. This software manages an architectural project’s whole life, from concept to final draft and documentation. “Renga” is developed by “Ascon”, a software developing company based in Saint Petersburg.

Vlad is a software developer. His specialization is mathematical calculation: intersections of objects, complex shapes and volumes. You probably noticed the snake in his hands – which is not just a toy. The whole production team is divided into sub-teams. Each sub-team has a name which is connected to the Harry Potter saga. Vlad is a member of the Slytherin team. That is why he keeps snake in his hands. It is his talisman. 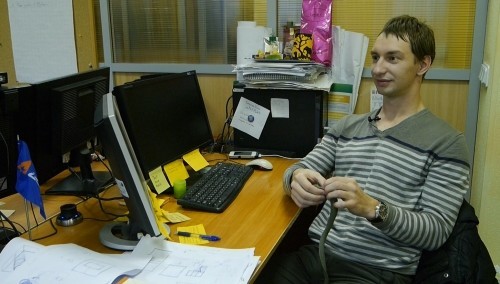 “Ascon” is currently employing 600 specialists. Its software solutions address key engineering design issues, such as accurate 3D modeling, preparation and release of drawings and design documentation, business process development, and engineering data management. The “Renga” team consists of more than 20 people with different specializations: user interface, graphic engineering, mathematical calculations. “Renga” has already been released and everybody can download the trial version and design their own dream building.

Computer-aided design (CAD) is the use of computer systems to aid in the creation, modification, analysis, or optimization of a design. CAD software is used to increase the productivity of the designer, improve the quality of design, improve communications through documentation, and to create a database for manufacturing. CAD output is often in the form of electronic files for print, machining, or other manufacturing operations.