all stories print article share article
The Saint Petersburg local online newspaper Bumaga successfully diversifies its business. Find out how they do it!

How do Russian media start-ups currently create revenue? The most common and efficient way is to diversify their business. Saint Petersburg local internet newspaper Bumaga (or Paper) follows this strategy and now includes a digital agency as well as an event agency. The digital agency produces marketing features and projects which make use of special features that only Bumaga can offer.

The “Science Slam” came to Russia from Germany in 2013. The idea is that five young scientists give a kind of stand-up presentation of their research. Bumaga has organized scientific battles in Saint Petersburg and Moscow. The Science Slam community has since spread all over Russia.
The “Open University” is another project connected to science. Professors and scientists from the three biggest  universities in Saint Petersburg tell the audience about different scientific fields. The idea of public lectures appeared in Bumaga and three universities supported it and became became the founders of the project. The founders are the IFMO University, the Politechnic University and the European University in Saint Petersburg.

More than 1,000 people attended the Open University on November 7-8. The program included sections about the smart city, the language of hate and the newest technologies bound to change our lives. 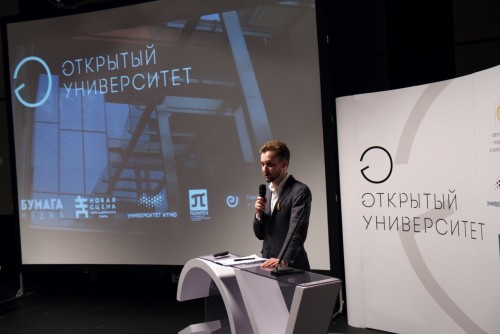 The Bumaga media team consists of professionals from various fields – from product management to digital marketing – who are broadly experienced but follow a fresh and young approach. It takes two months for the Bumaga Team to prepare an Open University event.

The “5top100″ program is a general term for a project to support universities. The Russian President Vladimir Putin signed the Order #599 “On Measures of Implementing Government Policy in Education and Science” on May 7, 2012. One of the tasks stated by the President to the government of Russia was to have at least five Russian universities rank among the top 100 of the world’s universities in the global rankings.

As part of carrying out the order, Prime Minister Dmitri Medvedev adopted a number of measures for the development of Russian universities, which included raising their competitiveness among the world’s leading research and educational centers.

The main aspects of the project include active promotion of the Russian system of higher education in key markets and gaining authority in scientific and academic societies, including rankings. Over 50 Russian universities submitted applications to the open competition for state support. Only 15 were selected as winners. The founders of the Open University were among them. Thus, OU is a good instrument for universities to further their prestige and PR-value.

Who are the Open University’s Founders?

ITMO University is one Russia’s leading higher education and research institutions, specializing in Information Technology, Optical Design and Engineering. Founded in 1900, today it is home to over 14,300 students and has earned its name “National Research University,” blending the culture of innovation and discovery with world-class education.

Saint Petersburg Polytechnic University was founded in 1899. Recently SPbPU became “National Research University”, also known in Russia and abroad as Polytechnical Institute — a recognized Russian and world-wide leader in the field of higher engineering and economic education. Currently it also remains at the leading positions in the rating of Russian engineering higher educational institutions.

Founded in 1994 with the active support of the city of St. Petersburg, the European University began operating as an elite graduate school in the social sciences and humanities in 1996. From its inception, the mission of EUSP has been to meet the needs of Russian social development by training a new generation of teachers and scholars in the best Russian and Western traditions.