all stories print article share article
For many people living in Hamburg, Germany, Sunday, August 23rd may have been just another ordinary day. But not for us Interlink Academy students. First, because we are here to discover the world of digital journalism in the city, and then, because we had tickets to the Dockville Festival... 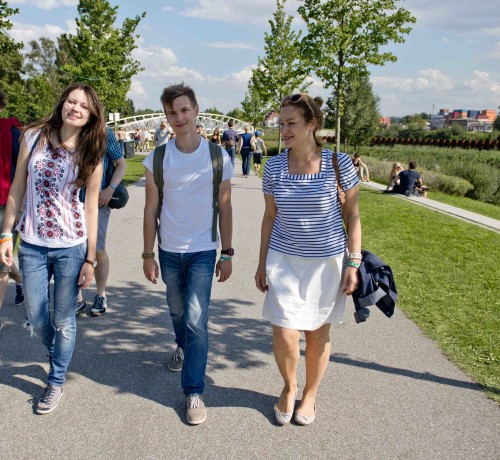 It started in 2007 as a two-day party and grew into a festival of art and music. Its participants, mainly students, have discovered here a genuine celebration of the arts featuring alternative culture, art, international bands, and environmental awareness. The organizers tell us that the festival has now become a multi-week creative process. Starting with the RichtFest on July 25th, there were various events every weekend, and new works of art were unveiled successively.
More than 100 singers (Interpol, Caribou, Tom Odell, Jose Gonsalez, Boys Noize etc.) from various countries wooed the public during the three-day festival. One band whose performance we witnessed was the Young Fathers, a hip-hop and pop group  comprised of G.Hastings, from Drylaw, Edinburgh, Alloysious Massaquoi, originally from Liberia, and Kayus Bankole, born in Edinburgh. Young Fathers made their stage debut in 2008. Last year they won the Mercury Prize for their debut album, “Dead.”

The Dockville festival attracts around 7,000 visitors each year, and therefore has great potential to enhance the city’s cultural and social scene. The top priority behind this unique cultural project is to empower artistic and creative integration.