all stories print article share article
BusinessContact and BusinessMorning are two TV programs both connected to one person: Giorgi Isakadze.

BusinessContact and BusinessMorning are two TV programs that are both connected to one person – Giorgi Isakadze. He was the person to gather a team in the winter of 2014 and, despite a lot of skepticism about whether business news-oriented shows would attract viewers, the team is now producing one of the most popular TV programs covering business and economics in Georgia. The programs always address the most recent developments in the business world and are aired three times a day (8.00 am, 12.30 pm, 6.30 pm) on the privately owned Georgian language channel Maestro TV. The author of this article, Anna Tskhovrebova, is a member of the team. She is a senior reporter for BusinessContact, which means that she and her cameraman are always at the center of developments connected to business and economics in the country. This time she tried to be camerawoman, editor and author all at once and chose her boss as the hero for her first experiment. 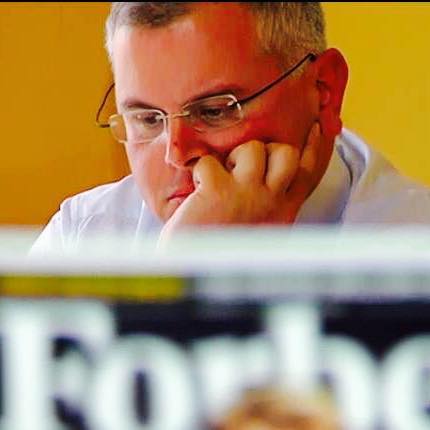 Giorgi’s career started long before his projects at Maestro TV. From 1994 to 1996, he worked as an editor in chief for the Banks and Finances Magazine and, in 1995, moved to the Georgian National Television Channel 1 (now Public Broadcaster of Georgia) as an author and narrator of the telecast “Sakme” (Business), where he stayed until 2000. Afterwards, he went on to the public sector and served as Head of the Anti-Monopoly Service of the Georgian Government, continuing as the assistant to the President for Budgetary and Fiscal Policy and ending on the position of Deputy State Minister of Georgia, which he held until 2003. Until he became the head of business programs at Maestro TV in 2014, he spent a long time in the private sector as the Executive Director of the Federation of Georgian Businessmen, First Vice President of the Business Association of Georgia and managing partner of several companies. In addition to this, he recently became the Editor in Chief and Managing Partner at Forbes Magazine in Georgia.

Starting as a private TV production studio in 1995, Maestro TV has become one of Georgia’s most popular cable television channels and is viewed by more than half of Tbilisi’s total population, which is more than a million, and almost half of the cable TV viewers in the remaining regions of Georgia, accounting for approximately 600,000 people.