all stories print article share article
It should have been subject to eviction within 24 hours, but instead has lasted for six years, and counting. The Gängeviertel community of artists celebrates the anniversary of its successful occupation of a historic block in the heart of Hamburg's downtown. 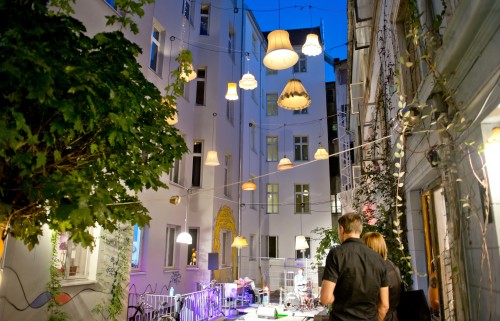 The squatters decorate their neighborhood using their own devices: everyone in Gängeviertel is either an artist or an activist

Next to the steel and glass office buildings on Gänsemarkt square in Hamburg city center, a loud party is underway. A man in his 40s in a sky-blue shorts and thick glasses is playing a guitar and drums. Dozens of people whose outfits resemble hippie rags more than executive suits are dancing, chatting, swigging beer from bottles and smoking cigarettes that smell stronger than simple tobacco.

“This is a place where you can party for free, make art, have conversations with people and yes, it is a nice part of Hamburg,” says Marius.

“I like it a lot, I think it is really cool, it is a very special place in Hamburg, with a lot of improv arts and concerts, that’s cool and we enjoy it,” added Manuela, a regular here and a friend of Gängeviertel’s residents.

A bathtub full of vodka

Through the huge window of one of the local galleries you can see a lady in red elegantly filling guests’ glasses with alcohol from a bathtub full of vodka. This art installation could be a metaphor for Gängeviertel, which began in 2009 with an illegal basement bar. A secret spot serving cheap booze, it soon became popular among local artists. 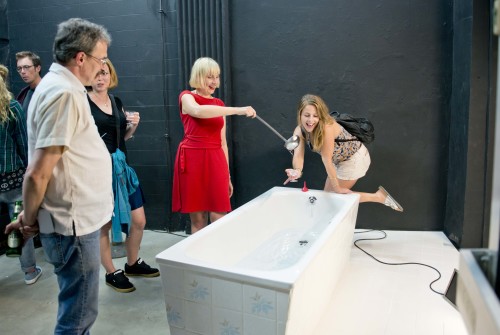 There is more than a touch of irony in this installation: the artists are poking fun at gallery-goers, who sometimes are more interested in the free alcohol at art openings than in the art exhibition itself

But their newfound home was already slated for demolition. The old buildings had been bought by a Dutch businessman, who planned to replace them with yet another block of offices. The artists – mostly from the leftist subculture – took up the fight against gentrification.

“At first we weren’t even thinking occupation, but just ‘hey! These buildings are so great, we have to do something’, because they were about to be torn down. Then, step by step, the idea of occupation evolved” says Matthias, head of the Gängeviertel group of lawyers who began negotiating with the city authorities six years and continue to do so.

This isn’t the first time the city has had to deal with squatters. In the past, such attempts have always ended in forced evacuation within 24 hours. But this time was different. Instead of sending the police into Gängeviertel, the authorities approached the squatters with an unusual offer. The city of Hamburg – known at that time just as a trading hub – was in a search for a new image. Inspired by American urban studies guru Richard Florida, local deputies had come up with a new strategy called ‘City of Talents’, based on the idea of cooperation with the local creative communities. 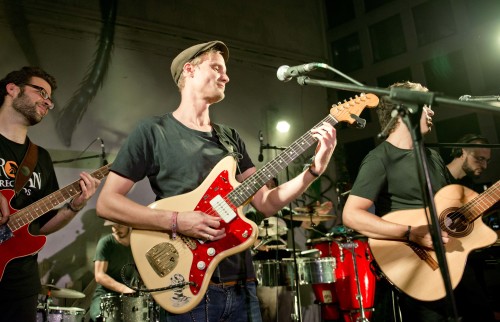 The squatters accepted the offer and over the past six years have transformed their neighborhood into a vibrant community. “Komm’ in die Gänge” has become its slogan — a clever play on words that means “Come to the Gänge district” as well as “Get moving.”

With the help of the authorities, the squatters refurbished the ruined buildings and turned them into a cozy nest. That is how one of the residents — an art school graduate named Solweig — describes the place where she lives and works at a ridiculously low price. Residents pay less than 5 euros per square meter per month — three times cheaper than the average downtown rent. Not surprisingly, Solweig’s exhibition, which opened on the community anniversary of community is dedicated to Gängeviertel.

“This community is my life! It’s the place I live in and I love it so much! I love all the people and they have been so supportive, hell, I couldn’t have done this on my own” says Solweig.

During the week-long celebration, over a thousand people flocked to the quirky backyards of Gängeviertel. The core of the community is much smaller — only around 70 activists. But it is growing steadily.

You can apply for a room — and a place in the community’s life — at a weekly assembly that is held every Wednesday. However, to be accepted you have to come up with a cultural or social project that will add value to the community. So if you have an idea, hurry up — Komm’ in die Gänge!