all stories print article share article
In the first half of 2015, seaborne cargo throughput in the Port of Hamburg was down nearly 7 percent year on year, to 70.8 million tons -- this is attributed to the economic situation of the city's two largest trading partners: China and Russia.

According to the Hamburg Port Authority, the 6.8 percent downturn was primarily attributable to weak foreign trade for the port’s two leading partners, China and Russia. Besides this, neither the Port Authority or the city government see a reason for worry, underlining instead that  bulk cargo handling was up by more than 12 percent on the previous year, and concentrating on the diversification of activity in the port.

Container traffic totals via Hamburg for China decreased by 10.9 percent to 1.3 million TEU and for Russia by 35.9 percent to 212,000 TEU. In the case of traffic with Russia, besides the fact that the trade sanctions are still in force,the distinct downturn in container throughput in Hamburg was also caused by other factors such as the weak ruble, the fall in the price of oil, and the economic recession. 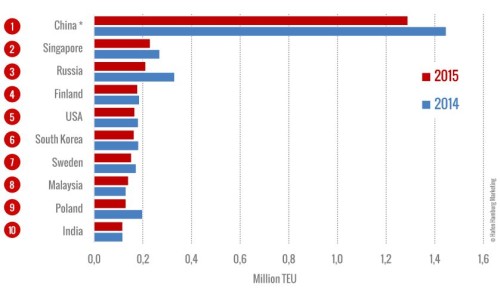 In addition to the weak foreign trade situation with two major partners,Wolfgang Schmidt, State Secretary to the Hamburg Senate Chancellery and Commissioner to the Federation, the European Union and for Foreign Affairs, said that the downturn was also attributable to the fact that the Euro is stronger than ever.

“This makes export harder but this [downturn] is not a trend. I do see a future for transportation and port activities and yes, it involves diversification,” Schmidt added. 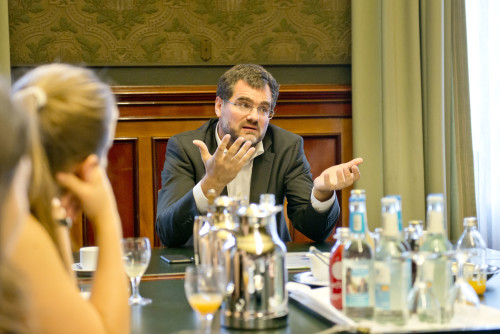 Wolfgang Schmidt meets with the Interlink Academy 2015 group of journalists from Eastern European countries at the Hamburg City Hall. Photo by Ahmad Mukhtar

The Port of Hamburg  mainly competes with large ports such as Antwerp and Rotterdam. Accordingly, the downturn in cargoes to and from China and Russia hit container handling at Germany’s largest universal port especially hard, since a large part of the cargo from and to these countries was transshipped via Hamburg, i.e. transferred from large container ships to feeder ships and vice versa.

The Port of Hamburg’s geographical position as a universal port located on the river Elbe inside the city  is considered both an advantage and a disadvantage.

“Unlike Rotterdam, we cannot grow, and the vessels have to come inside the city to deliver their cargo, but it does have its advantages: transportation from vessels via ships is cheaper than via trucks. Besides being expensive, the latter can cause traffic jams,” Wolfgang Schmidt explained.

He said that to maintain and increase the Port of Hamburg’s competitiveness, the government sees a need to develop its infrastructure, including adapting and expanding access and dispersal corridors for freight transport by rail, truck and inland-waterway crafts.

Container handling by trade area from January to June 2015

The Hamburg Port Authority (HAP) has already set itself the goal of developing the Port of Hamburg into a smartPORT in the next few years, which means that information exchange will become more intelligent. HAP expects this will lead to an increase in the port’s quality and efficiency as an important link in the supply chain, which could result in an increase in the port’s annual value creation as well. The Port of Hamburg currently generates added value of around 20 billion Euros throughout the Federal Republic of Germany.