all stories print article share article
Whether you are passionate about German history or simply like wandering around the tantalizing city of Hamburg, the Saint Nicholas Memorial, located only a few minutes from City Hall, is a place not to be missed.

We decided to visit one of the most important architectural landmarks of the city right on the first day of our two weeks of training at the Interlink Academy. Why? Because St. Nicholas is one of the oldest churches in Hamburg, founded in 1195, first built in wood, dedicated to Saint Nicholas, patron saint of sailors. 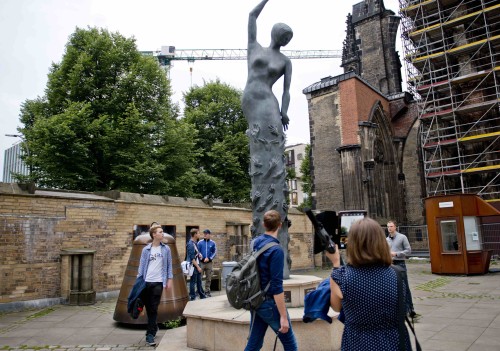 The St. Nikolai memorial is located in the city center of Hamburg

In 1842, during the Great Fire in Hamburg, the church burned down. Shortly after, it was rebuilt by a British architect in neo-gothic style. However, nowadays visitors cannot admire its whole beauty. Unfortunately, airplanes attacked the city of Hamburg during World War II – 35,000 people died and 250,000 houses were destroyed, as was the church of St. Nicholas. The roof collapsed and the interior suffered heavy damage. Although the idea of restoring the entire building was considered, it was decided to keep it the way history left it, preserving the landmark as a vivid memorial against the war.

The steeple of St. Nicholas measures 147 meters. From 1874 to 1876 it was the tallest building in the world, and it remains the second-tallest construction in Hamburg today. Since September 2005, an elevator takes visitors up to a 76-meter high platform inside the tower, which offers amazing panoramic views across Hamburg. But be sure you’re there before 6 p.m., otherwise you might miss this unique opportunity, as we did.

Today the entire memorial is a place of commemoration for the victims of war and persecution from 1933 to 1945. The permanent exhibition shows the cruel history of the air war and its consequences. One of the monuments that caught my eye is the Angel on Earth. Its plaque recalls the words of Edith Breckwoldt: „Take my hand and let me lead you back to yourself.” That probably is what all of us do while (re)discovering history – we meet ourselves, again and again.

„One of the best ways to make yourself happy in the present is to recall happy times from the past.” (Gretchen Rubin) And how better to help you with that than to take plenty of photos!